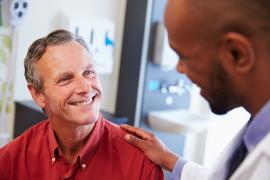 Have you been thinking about participating in a clinical trial, but not so sure you’re ready to delve into the unknown? Alzheimer prevention participant – who’s taken part in not one, but two studies! – gives his insight and advice into the experience.

Dirk (whose last name is being withheld to protect his privacy) is from Scottsdale, Ariz. The 78-year-old has been participating in Alzheimer’s disease-related studies since 1993. He was motivated to get involved because his mother dealt with the disease.

“My mother presumably passed away from Alzheimer’s disease in 1987,” says Dirk. “I say presumably because we were told it would take an autopsy to be sure. My father wasn’t willing to do that, so we can’t say with certainty. But based on her doctor’s observations and ours, we believe strongly that’s what it was.”

A few years after his mother’s death, Dirk saw a newspaper ad seeking people who were interested in participating in Alzheimer’s research. After a screening interview and some bloodwork, he took part in a data collection study for the next 20 years. Eventually a drug clinical trial came up, which seemed like a great opportunity to make an even greater difference. He wasn’t able to do both, so he discontinued the first study and enrolled in the trial.

“I’m a naturally curious person,” says Dirk. “I’m a forensic architect meaning that when something is wrong with a building, I’m called in to figure out what might have gone wrong and how it may be corrected. So, in a way, being involved in research is somewhat related – both aimed at solving mysteries!”

Today, Dirk has a monthly “infusion day,” which typically lasts about three hours. He meets with a physician, answers several questions and has his vital signs taken. A nurse inserts a needle in his arm, which delivers a dose of fluid. The study is “double-blind,” meaning neither Dirk nor the study staff know if he’s getting medication or a placebo. Thus far, he’s had 45 infusions.

Every third visit takes about four hours and involves memory and skills testing in addition to the infusion. And each year Dirk has a longer six-hour appointment involving physical and neurological exams, an EKG, an MRI and blood and urine testing. A PET scan was performed at the start of the study and another will be performed at the conclusion.

“In order to qualify for this study, I know that I have a genetic marker and a biomarker associated with Alzheimer’s, but no onset” he says. “I was required to meet with a genetic counselor who talked with me and asked me what I would do with the information if I found out my results. I told her I’d want to continue no matter what. The way I view it, it’s kind of like knowing heart disease runs in your family or that you have high cholesterol. It’s information, but doesn’t mean you will absolutely develop heart disease.”

For his particular study, Dirk wasn’t required to make any specific lifestyle changes other than making time for his “infusion days.” Still, he’s stayed current on the latest research and has voluntarily made changes such as losing weight, getting more exercise and cleaning up his diet. He’s also shared information with his family members and with fellow military officers who served with him in Germany in the 1960s. A couple of them are showing signs of cognitive impairment.

All in all, Dirk’s clinical research experience has been overwhelmingly positive.

“Whenever I have an opportunity, I try to educate people and to recruit,” says Dirk. “The more people who participate in Alzheimer’s research studies, the better. There’s a strong push that we will see the last generation of Alzheimer’s. I hope that’s true and that I will have played a small part in that.”

To find a research study near you, visit www.endalznow.org/find-a-study.